What is the Methane Testing Process?

Occasionally, a methane hazard zone may not exist on a property. As a result, the Methane Testing process will not be necessary. Alternatively, a parcel may have a methane zone or methane buffer zone. In such cases, the property is subject to the methane testing and mitigation process. To illustrate, a list of possible Methane Hazard Classifications per the LADBS Methane Code is available below.

If LADBS denotes an area as a possible methane hazard, the classification is likely a result of historical or existing oil drilling.

What will happen on my property during a Methane Soil Test?

LADBS requires Methane Tests according to the LADBS Methane testing standards. The testing will consist of multiple soil gas probes to monitor methane gas pressure and concentrations. The quantity and depth of these methane probes are a function of the property size and the scope of work. Further, methane testing experts will place shallow soil gas probes at increments of one for every ten thousand square feet of property. 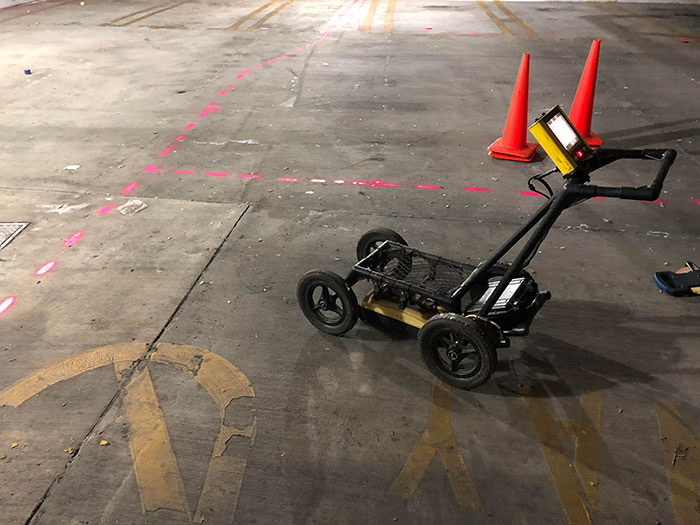 Environmental field technicians identify the locations of the methane boreholes during a site survey.  The methane mitigation consultant establishes the scope of the Methane Testing before the Site Survey.  Thereafter, engineers use their judgment to locate the boreholes in areas that will not affect underground utility lines. Subsurface utilities that may interfere with the methane boreholes are waterlines, gas lines, sewer lines, and electrical conduits.  Electrical conduits can consist of low-voltage and high-voltage electricity. The borehole location will be marked using chalk paint or a semi-permanent delineation tool.

Because engineering judgment is imperfect, conducting ground-penetrating radar (GPR) is still required. This process involves hiring a third-party surveying specialist to scan the underfloor and verify that the proposed methane test borehole locations do not conflict with any underground utilities. The ground-penetrating radar company will collaborate with DigiCert to help establish and finalize any possible underground utilities present. DigAlert is a government-managed company that organizes underground utility companies’ responses to the proposed scope of work that may conflict with their utility lines. It is the law to call DigAlert if you are digging during Methane Mitigation construction within Los Angeles. Submitting a DigAlert ticket falls within the responsibility of the Methane testing specialists and Methane Mitigation Contractor.

The responsible professional engineer will supervise, inspect and verify the methane testing work.  The methane testing work and soil gas borehole construction must be per LADBS testing standards’ specifications. During drilling, it will be the responsibility of the drilling contractor to place the methane soil gas probes per the LADBS Testing standards. The construction of a soil gas probe consists of sandwiching a porous vapor probe within a sand layer.  And sandwiching the sand between two bentonite seal layers. The sand allows for a porous region to promote soil gas migration. Concurrently.  Moreover, the bentonite seal will prevent soil gas seepage.  Consequently, the bentonite will ensure that accurate methane soil concentrations at the corresponding depth.

Methane Testing for a single-family dwelling or an accessory dwelling unit typically consists of two boreholes.   Furthermore, each borehole will have three soil gas probes five, ten, and twenty feet below the ground surface. Engineers record the Methane soil Gas measurements at the three depths of each borehole.  Again, testing complies with the LADBS Methane Testing standards. Field Scientists monitor the methane soil gas and pressure concentrations during two days.